Havoc in South Florida: The Great Okeechobee Hurricane of 1928
Start Your Quote 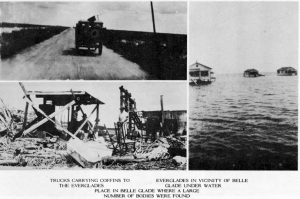 Florida’s location on a coastal peninsula has always made it vulnerable to hurricanes that blow in from the Caribbean. As a point of reference for how bad a Floridian storm can be, people often compare storms to 1992’s Hurricane Andrew, which killed 61 people and caused $26 billion of destruction. Few can recall the far worse hurricane that hit South Florida in 1928, partially because of who it killed and partially because much effort has been made to erase this storm from public memory in the almost 90 years since it made landfall in September of 1928. Only today are people finally speaking out about the Hurricane of 1928 – also known as the second deadliest hurricane in American history, right after the Hurricane of Galveston.

Commonly referred to as The Great Okeechobee Hurricane of September 26th, 1928, this terrible storm killed between 2500 and 3000 people and caused what would today equate to $16 billion in damages. Still, because the vast majority of those killed were poor, black, migrant laborers, and because Florida’s government deliberately led the public to believe that the storm was less terrible than it really was in an attempt to prevent damage to the tourism industry, no one really remembers it – except for those who lived through it.

In a fascinating 2003 piece for The Sun-Sentinel, Nicole Sterghos Brochu interviewed some of these survivors, and her work makes it clear that time may allow wounds to heal, but the scars of memory never go away completely. Mostly, it is the fact that the victims of this storm have never been appropriately honored that upsets the storm’s survivors the most, but it is also the horrifying memories of the storm itself and the death it brought to the area that remain in the survivors’ minds. We highly recommend reading this piece if you are interested in learning more about The Great Okeechobee Hurricane of 1928 – and remember, we at Paradise Exteriors are always here to help you make sure that you’re ready for The Next Big Storm.

If you need more info on The Great Okeechobee Hurricane, call Paradise Exteriors, LLC at 561-732-0300, or fill out our online request form.