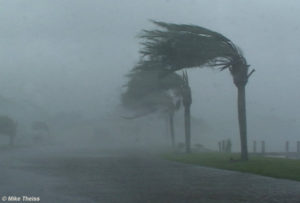 Hurricane Charley was a week-long category 4 hurricane, and the second great storm to ravage the Florida coast in 2004. At its peak its winds reached a top speed of 150 miles per hour (or 240 km/h) making it one of the strongest storms to hit the southern coast in the last twenty years. In the wake of the storm, Florida recorded roughly $5.5 billion in property damage (with areas outside of Florida seeing an additional $2.5 million). To this date it ranks in the top ten costliest hurricanes to ever hit the United States.

Just before the great threat of the storm, Jamaica, Cuba, and the Cayman Islands issued official storm warnings after facing the initial brunt of the gales and thousands of citizens were brought off the island in a mass evacuation. On August 11th Jeb Bush, then governor of Florida, issued a state of emergency and called for evacuation of areas near Tampa and the gulf.

It’s important to know that only right before Charley hit landfall and reached winds of 150 miles per hours it was considered a category 2 hurricane and was expected to reach top speeds of 115 mph. It was only once the storm picked up that multiple counties declared states of emergency and began to take protective action. Out of the one and a half million people that left their homes seeking stronger shelter, none could properly prepare for the building threat. People were simply not properly informed of the severity of the storm.

In Florida alone, $5 billion dollars of property damage on top of another $300 million in agricultural losses devastated the state. Hundreds of people were injured with few killed, and houses and social centers lay unroofed and in ruin. In some counties, nearly every building suffered destruction.

When conditions of nature threaten us with unstoppable forces, the most important thing we can do is keep ourselves alert and safe. Knowing that our windows and doors are strong against compelling winds is a start to preventing great amounts of damage.

If you need more info on Hurricane Charley in South Florida, call Paradise Exteriors, LLC at 561-732-0300, or fill out our online request form.