The End of Our Lucky Streak: Hurricane Hermine Hits Florida
Start Your Quote 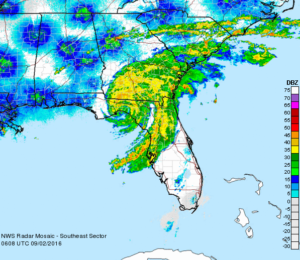 While Hurricane Hermine blew back out to sea earlier than anticipated earlier this month, causing damage to fewer coastal states than predicted, Florida did not escape unscathed. Finally, after 11 long years without being directly hit by a hurricane, Hermine came along and ended our lucky streak, especially in smaller coastal communities close to the Gulf, especially near Tampa and Tallahassee, which saw vast damage and flooding after the storm had passed.

These communities, which are mostly sleepy, quiet enclaves that attract tourists and residents looking to escape the stresses of living in a big city, are frequently situated on land that resembles swamp more than firm land (much like most of South Florida). In low-lying coastal areas such as these, flooding of major roadways is always a possibility after a big storm, and this is exactly what occurred in early September of this year when Hermine hit the region. Luckily, when the storm made landfall, it only ranked as a Category 1 hurricane, and this, in conjunction with the fact that the vast majority of residents had already evacuated the area before the hurricane hit, prevented a larger loss of life from occurring beyond the two people who were killed by the storm (one in Florida, and one in North Carolina). John Mayes, 56, was the only Floridian victim of the storm – he was hit by a falling tree while sleeping outside of a gas station near Ocala (about 65 miles northwest of Orlando). The other victim was killed in North Carolina when strong winds caused his vehicle to turn over while crossing a bridge.

These two fatalities remind us that hurricanes are dangerous for many different reasons, including flooding, heavy rainfall, and extreme winds that can cause objects (like trees, cars and structures that have not been properly secured), to become airborne and smash into houses, other vehicles and even people – essentially, anything that lies in their path. While the vast majority of Floridians managed to escape Hermine without much incident, it is important to take note of the fact that now that our hurricane-free streak has come to an end, we must be diligent about preparing for the next extreme weather event, especially because we are in the thick of hurricane season right now. If you need assistance hurricane-proofing your house, or you’d like advice about how to protect your family and property in a dangerous storm, please do not hesitate to reach out to us here at Paradise Exteriors for help.

If you need more info on Hurricane Hermine, call Paradise Exteriors, LLC at 561-732-0300, or fill out our online request form.