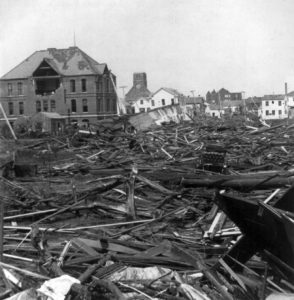 We’ve spoken before on this blog about the unpredictable danger of hurricane storm surges. The best demonstration of the scale of destruction these surges can cause can be found in the story of the most deadly recorded hurricane in American history, The Galveston Hurricane of 1900.
In 1900, the city of Galveston, Texas, which sits on an island off the state’s coast, was a thriving town with almost 40,000 residents. At that time, the highest point in all of Galveston sat a mere 8.7 feet above sea level. Essentially a sand bar on the Gulf Coast, the city’s protection against storm surges had been decreased even further with its construction, during which sand was removed from dunes on the city’s shoreline to fill in its lowest-lying areas. This error in city planning would be a contributing factor to the utter ruination that Galveston would incur on the fateful day of September 8th, 1900.

For days before the hurricane made it to the island, countries east of the United States had been reporting weather conditions that indicated that a major storm was gathering steam and traveling westward. On September 4th, 1900, the Galveston outpost of the National Weather Service received a message from its headquarters in Washington, DC, that a tropical storm had passed over Cuba and was heading towards America. Inaccurately, forecasters in the US predicted that this storm would curve over Florida and then loop back towards the East to disappear over the Atlantic. As a result, they vastly underestimated how important it was for residents to evacuate the island city of Galveston. What also should have been taken into consideration, but wasn’t, was the fact that if the storm did make it to the Gulf Coast, it would be introduced to the perfect environment in which to transform into a hurricane, as the water in the Gulf had been exposed to a sky mostly devoid of clouds for weeks on end and had heated up to what one report from the time described as “the temperature of a bathtub” as a result. As day broke on September 8th, the weather was temperate enough – aside from a few rainclouds – that the residents of Galveston had no reason to suspect the horrors that this day would bring.

It is easy to pass judgement about inaction with the benefit of 116 years of hindsight. In 1900, though, weather tracking was but a shadow of what it is today, and there was no real way for anyone to have predicted just how bad the Galveston Hurricane would be. After the storm was over, it was determined that the storm surge it brought with it had reached a height of 15 feet – nearly twice the height of the tallest point in Galveston. In light of this information, it is all too clear that nothing short of a complete evacuation of the city would have been enough to protect its residents. 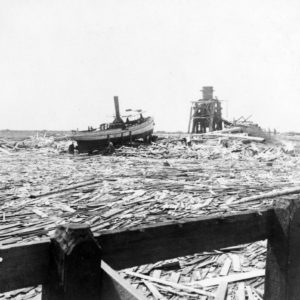 For perspective: Hurricane Katrina’s death toll came in at 1,836. The death toll of The Galveston Hurricane, on the other hand, came in at a minimum of 6,000 and a maximum of 12,000 dead, with most reports settling on 8,000 as a compromise. Over 3,600 homes in Galveston were completely destroyed that day. On September 9th, the day after the storm, G.L. Vaughn, the manager of the Houston branch of Western Union, described in a telegram to the Chief of the US Weather Bureau that reports had begun to come in describing “a large steamship stranded two miles inland” and the sight of at least 200 bodies strewn across a prairie and clearly visible from 6 miles away.

And still – communication at the time was so reliant on transportation that no one on the mainland knew the disaster that had befallen Galveston until a day and a half after the damage had been done. It was only when a group of six messengers from Galveston reached the telegraph office in Houston at 3am on September 10th, 1900, that a telegram explaining the extent of the city’s damage was finally sent to President William McKinley. The telegram simply read: “I have been deputized by the Mayor and Citizen’s Committee of Galveston to inform you that the city of Galveston is in ruins.” 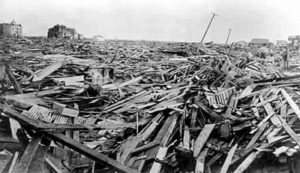 Retrospective analysis ranks the Galveston Hurricane of 1900 as a Category 4 on the Saffir-Simpson Hurricane Scale. Sadly, Galveston was never able to reclaim its former identity as a thriving city and center of commerce after the storm; in fact, the development of Houston, TX, can be directly attributed to the irreparable damage caused to Galveston by the hurricane that would forever share its name.

The story of The Galveston Hurricane of 1900 has, for the most part, been lost to history. Even so, it did prove one important point that we should all be aware of, even today: there is no such thing as being over-prepared for a hurricane, as you never know just what a storm is capable of until after it has already passed.

If you need more info on The Galveston Hurricane, call Paradise Exteriors, LLC at 561-732-0300, or fill out our online request form.