What Hurricanes Were Like in Prehistoric Times
Start Your Quote 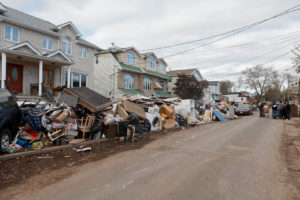 . First, there must be “a weather disturbance, such as a thunderstorm, that pulls in warm surface air from all directions.” Second, there must be “water at the ocean’s surface that is at least 80° Fahrenheit (27° Celsius).” Based on these facts, it makes sense why hurricanes are more prevalent in the Earth’s warmer climates – but what were hurricanes like millions of years ago, when the average temperature of our planet was significantly higher than it is now?

Scientists who study prehistoric storms, who are known as Paleotempestologists, have been conducting research in the hope of answering this question. By extracting and analyzing soil and sand samples, which are known as sediment core samples, from shorelines around the world, Paleotempestologists have discovered that prehistoric hurricanes were not only far stronger than hurricanes today, but they were also more frequent. By analyzing sediment layers that core samplers have pulled out of these shorelines, scientists have been able to determine which layers of sand are lighter, indicating calm weather patterns, and which are heavier. The heavier sand indicates the occurrence of a major prehistoric storm, in which sand that lay at the bottom of an adjacent body of water was upended by the strength of a hurricane and washed onto the shoreline. And since the core extractor removes the sediment in exactly the same order it was put down in, Paleotempestologists can date when the biggest storms occurred – and many of them happened before humans were around to record them.

This is likely because of how much warmer the global climate was back then. To give you perspective on how different the earth was back then, just think of Antarctica. Today, its climate is icy and glacial, making it all but uninhabitable for humans. In prehistoric times, though, Antarctica was so warm that palm trees grew freely across its terrain, and its temperature stayed between a high of around 77° F during the summer months and a low of only 50° F, even in the dead of winter! This high average global temperature meant that sea surface temperatures were also much warmer back then, which, as we mentioned in the beginning of this post, comprises one half of the environment needed to foster a hurricane. Coupled with the usual weather conditions that comprise the other half of necessary conditions, this higher sea temperature meant much, much larger storms. In fact, off the coast of Massachusetts, one study revealedthat for a period of 1,000 years beginning in 150 AD, the Northeastern USA was hit by over 20 major storms, each of which left a different striated layer of heavy sand on the area’s beaches. To give you a sense of the magnitude we’re talking about here, consider that Hurricane Sandy, a storm that devastated New England in 2012, was so insignificant compared to these ancient storms that it left absolutely no trace of itself on these shorelines.

This data about the frequency and strength of the earth’s past storms is not just interesting, but extremely helpful when it comes to predicting where future weather events are due to occur next. With this insight into the earth’s weather patterns, we increase our chances of being able to adequately prepare for the Next Big Hurricane and prevent the widespread fatalities and property destruction that have been caused by other major storms in recent memory.

If you need more info on Prehistoric Hurricanes, call Paradise Exteriors, LLC at 561-732-0300, or fill out our online request form.